Why a tall bike?

I have to admit, at first I was planning a tall bike tour just to be eccentric. I then discovered that tall bike touring is actually surprisingly practical! Being able to put most of the weight under you and between the wheels makes the bike very stable. This is in addition to the natural increase in stability of a tall bike. It is counter-intuitive, but tall bikes are actually easier to balance than a normal bike. Think of it this way: imagine balancing a broom stick on your hand, pretty easy, right? Now imagine balancing a pencil on your hand - kind of tricky, you need to make really fast adjustments. Basically, the advantage of the tall bike is that when you start to fall, you are pivoting around a wider arc, so you have more time to respond and make adjustments. This is what makes a well-built tall bike especially fun to ride, you just get to hang out up there! I first learned how to track stand on a tall bike because it is so much easier.

Another reason to ride a tall bike is the reaction from other people and drivers. On a normal bike, most drivers ignore you, some are nice, and a few hate you. On a tall bike, the situation is totally different as so many people are fascinated by the bike. I made a chart to illustrate the difference: 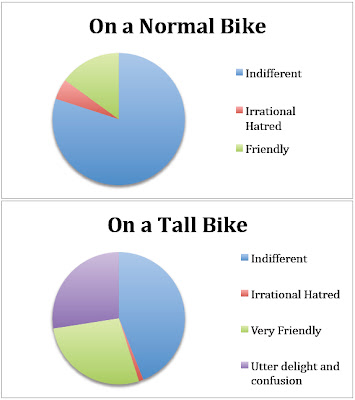 This makes riding much safer and enjoyable - as drivers, instead of just trying to get around you as quickly as possible, generally slow down to get a good look, perhaps take a picture. It is such a strange feeling to be the center of attention rather than just an obstacle for drivers. I think every bicyclists should go for a tall bike ride at least once just to experience the difference.

Another advantage is that the tall bike provides much more opportunities for interaction when traveling than a normal bike. I have already met so many interesting and nice people because of the bike that I would normally not have a chance to meet. I met a guy who builds his own haunted house for halloween, so we talked prop-making for a while. Another gentlemen waved me down who restores old cars. It generally attracts people interested in building stuff and trying new things, just the kind of folks I want to meet on my trip!

Between the improved cargo capacity and stability and provoking more interaction with people, it seems to me that tall biking is the only way to go!
Posted by Bobby at 3:23 PM